With the foundation KÖMMERLING Better World Stiftung, we support the German “Aktion Deutschland hilft“ campaign and the Rhineland Palatinate donation campaign for the flood emergency aid with EUR 20,000.

We are happy to help in the face of the flood disaster in our region, because we want to be a responsible and solidarity partner.

You can find options for your donations here: 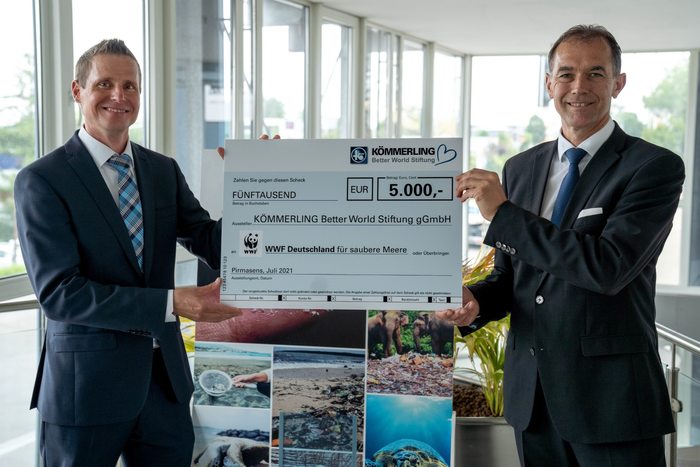 We were pleased to support the World Wide Fund For Nature (WWF) with a donation from our foundation for the worldwide projects to combat the causes of plastic waste in the oceans.
For several years we have been working consistently on avoiding pellet loss in our factories and we were the first company in the German profile industry to be awarded the certificate of the pro-K initiative "Zero pellet loss". 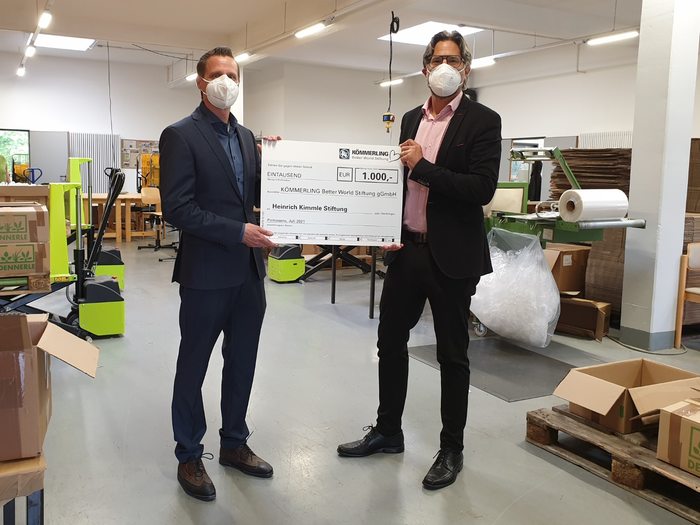 With the foundation KÖMMERLING Better World Stiftung we are again supporting social institutions at our German sites this year. So, we were very happy and proud to present a donation to the Heinrich Kimmle Foundation in Pirmasens in July. They use the funds for their new educational project "Bees Plus". A forest classroom will be built for inclusive educational projects for children, adolescents and adults with and without disabilities. 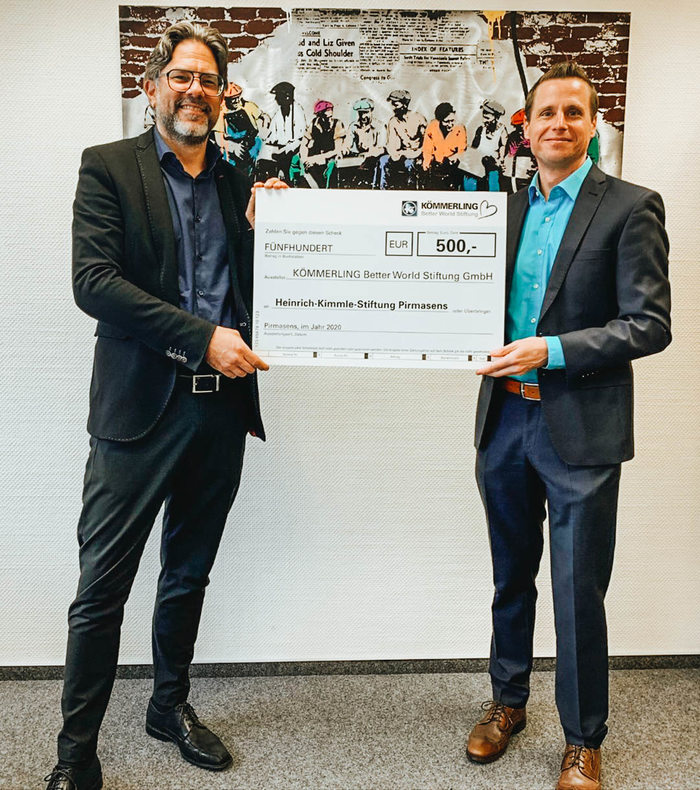 Before the pandemic, when Bundesliga club 1. FSV Mainz 05 was still holding matches in packed stadiums with main sponsor KÖMMERLING's staff and guests cheering on the team from the sponsor's box, the one thing that everyone wanted to know after the game was which “expert” had won the sweepstake by correctly guessing the score.

And the best thing about the sweepstake was that all bets were placed for a good cause because the winner got to choose the non-profit organisation receiving the EUR 100 donation from the KÖMMERLING Better World Stiftung foundation. The three charities designated to benefit from the sweepstake were Mainz 05 hilft e. V., the Heinrich Kimmle Stiftung in Pirmasens, the Berliner Tafel organisation and Restart Jugendhilfe in Troisdorf.

The organisation chosen after each sweepstake received a EUR 100 donation, and the total amount donated to each organisation was indicated by a glass column with red balls inside. The EUR 2,500 raised through the sweepstakes was topped up by the KÖMMERLING Better World Stiftung foundation to EUR 3,000. Mainz 05 hilft e.V. and Restart Jugendhilfe Troisdorf each received EUR 1,000, while the Heinrich Kimmle Stiftung Pirmasens and the Berliner Tafel organisation each received EUR 500.

profine marketing director Marc Habermeyer handed over the cheque to Marco Dobrani from the Heinrich Kimmle Stiftung Pirmasens. Marc Habermeyer: “The foundation Heinrich Kimmle Stiftung runs a large-scale competitive sport community that is entirely donation-funded. Our donation was used to provide training to talented athletes and to make it possible for them to compete at the Special Olympics. We’re delighted to have been able to help them!"

Here are brief profiles of each organisation and links to their websites in case you would like to make a donation.

RESTART Troisdorf helps families, children and young adults in Troisdorf and the surrounding region. It is a multi-denominational, non-profit association providing regular weekly events such as meeting groups for mums and toddlers, and a café for kids and young adults. As an accredited institution RESTART Troisdorf is also involved in voluntary youth and family support activities.
https://restart-troisdorf.de

The foundation Heinrich Kimmle Stiftung is an independent public law foundation founded in 1965 by prelate Heinrich Kimmle. As a regional disabled services provider the foundation supports people with handicaps at work, in the home, and in pre-school and school education with the objective of helping them to lead the most independent life possible.
http://www.hk-stiftung.de

What began as a vision in 1993 is now an indispensable element of Berlin's social landscape and hundreds of other Tafel organisations have been established throughout Germany since. Many people in our society are dependent on food donations in addition to their state benefits. Berliner Tafel e.V. transports over 6,600 tonnes of food to more than 300 social organisations, has 45 hand-out points and supports 125,000 Berliners every month.
https://www.berliner-tafel.de/berliner-tafel/

The calls from many quarters for sports associations to take on greater responsibility for their local communities were nothing new when the initiators of Mainz 05 hilft e. V. decided to listen to them and act on them in 2010. They set up a framework that allowed them to link community involvement and requests for help to the club and called it Mainz 05 hilft e. V. The objective of the association is to provide fast and uncomplicated assistance to people in need in the region – and it has been doing just that for many years.
https://www.mainz05.de/engagement/mainz05-hilft/ueber-uns/ 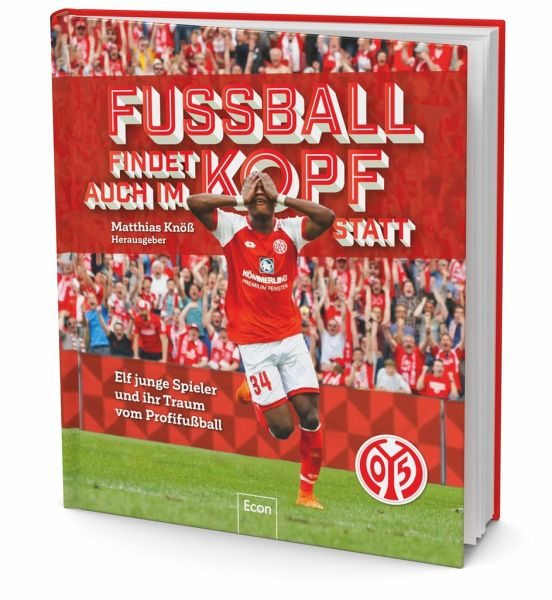 Football is an attitude

The youngsters give one-hundred percent as they run up and down the pitch – until they are completely exhausted. Their dream is to become professional footballers. But it takes more than being an exceptional player to achieve that dream. It takes a special attitude to life. How does it feel? What does a day in the young players’ lives involve? Read all about it in the book.

The unique book project was realised with the support and collaboration of the foundation KÖMMERLING BETTER WORLD STIFTUNG, the NELE NEUHAUS FOUNDATION and MAINZ 05 football club: “Fußball findet auch im Kopf statt“ (Football is an attitude) – eleven young players and their dream of playing professional football.

“There has never been another football book like it,” said publisher Matthias Knöß. “The Nele Neuhaus Foundation helps children and adolescents to improve their reading, writing and speaking skills. We are always asking ourselves what topics we can use to engage and inspire these youngsters. And football’s a great choice! That’s how we came up with the idea. So we teamed up with MAINZ 05 and the club’s main sponsor KÖMMERLING, two very committed cooperation partners from the very outset of the project.“

We achieved some impressive results. Eleven young footballers between the ages of 14 and 22 wrote down their very personal stories for us. They’re authentic, uncensored and direct, providing deep insights into the daily routines and emotions of ambitious young players. Strength of will, sacrifices, testing out limits and celebrating achievements are all part of these youngsters’ daily routine, because they are all growing up at the Bundesliga club’s Youth Training Centre. They live far away from family and friends, and often from their home country. Their only goal is to realise their dream of being a professional footballer. The narrative is honest and provides brand new insights into professional football.

Interaction is a special aspect of the book, which includes QR codes for each story with links to short videos about the boys.

Available at book stores, web shops and the Mainz 05 fan shop from 14 September 2020, or click the following link to order a copy: https://www.ullstein-buchverlage.de/nc/buch/details/fussball-findet-auch-im-kopf-statt-9783430210478.html 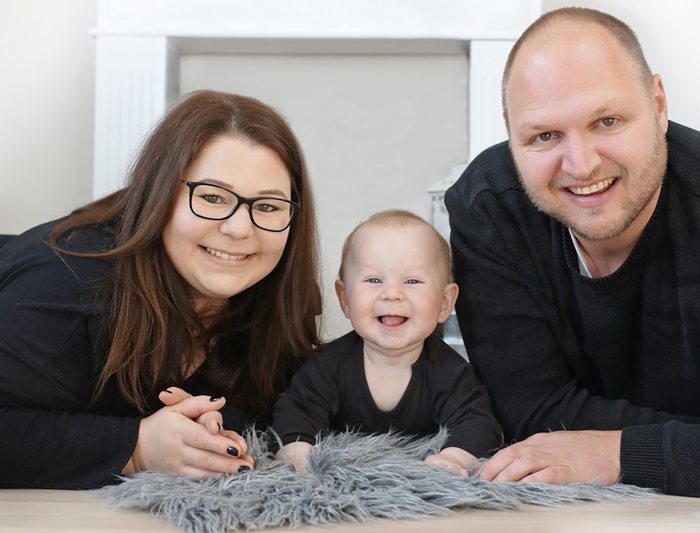 Together in the fight against cystic fibrosis

Cystic fibrosis is a genetic metabolic disorder. In Germany up to 8,000 children, teenagers and adults are affected by this incurable disease. Patients with cystic fibrosis have varying symptoms. It mainly affects the lungs and pancreas but can also affect other organs. Many with this illness suffer from breathing difficulties and severe problems with the digestive system. Patients with cystic fibrosis are among the high risk group for whom the Corona pandemic can be life-threatening.

When our colleague Manuela Richter found out that her two-year-old neighbour Henri had this terrible disease, it was clear to her that she had to do something to help him.

“Every donation helps to support research into cystic fibrosis and to improve the life-expectancy of children and babies. The fight against cystic fibrosis is long and expensive,” Manuela explains.

She asked our company for support and Ralf Wagner our accessories manager did not hesitate to make a contribution with the foundation “KÖMMERLING Better World Stiftung”.

He also took some committed suppliers on board. Together with Innoperform, Regel-air Becks and Hoffner a group donation was made. All three companies produce ventilation solutions for a healthy indoor climate. Fresh air is vital for patients with cystic fibrosis.

Ralf Wagner: “I immediately thought of our partners when I heard about this and they were really keen to help. Together we were able to donate a total of 5,000 EUR to cystic fibrosis research. This may be a small contribution compared to the great suffering of the patients but certainly a signal of hope for Henri.”

The German association Mukoviszidose e.V. networks cystic fibrosis patients and their families as well as doctors, therapists, carers and researchers. The association bundles different experiences, competences and perspectives with the goal to enable all those affected by cystic fibrosis to live their lives as independently as possible.

If you would like to help little Henri, you can do this via his mother’s donation website: https://www.altruja.de/henri-will-aufatmen/page/2#spenden

Patrick Bohn is a colleague who works at our mixing plant in Pirmasens. In November 2019 the world fell apart for him and his family when his four-year-old daughter Jayla was diagnosed with an extremely aggressive, malignant and inoperable brain tumour (pontine glioma, DIPG). Her only hope of recovery is therapy with a drug called ONC201 which isn’t licensed in Germany yet. As a result, the health insurance fund refused to pay the EUR 20,000 per year cost of the treatment, or EUR 100,000 in total for a five-year treatment period. At the family’s initiative the “Saarländische Krebsliga” cancer support organisation held a fund-raising drive to make the treatment possible.

Dr. Peter Mrosik, owner and CEO of the profine Group: “When we heard the sad news we immediately knew we had to do something to help. Our foundation “KÖMMERLING Better World Stiftung” made a financial donation and encouraged all members of staff to help little Jayla and her family with their donations and fund-raising ideas. I’m very proud of them for responding so quickly.”

Our colleague Yvonne Di Loreto read the foundation’s donation appeal and immediately came up with a fund-raising idea. She and her family are active members of the TS Rodalben handball club near Pirmasens. Once a year the club organises a 1000+ handball game which is played for at least 1,000 handball fans at the TSR sports hall. At Yvonne’s initiative, this year’s match was turned into a charity match for Jayla. For every TSR goal scored the “KÖMMERLING Better World Stiftung” donated EUR 50 and, at the end of the game, a total of EUR 6,750 was handed over to our colleague Patrick Bohn for Jayla.

Thanks to this handball match and similar events the entire EUR 100,000 has now been paid into the Saarländische Krebsliga’s donation account and Jayla’s treatment could already begin. ONC201 kills cancer cells without damaging any healthy cells. We hope from the bottom of our hearts that it helps Jayla to recover from her illness.

Bringing people together and providing real help through ideas are two of the strengths and priorities of the foundation “KÖMMERLING Better World Stiftung”. So thank you very much to Yvonne for a fantastic idea and for helping a good cause!

Other children battling cancer can also benefit from your donations and support. If you would like to make a donation, the Saarländische Krebsliga's donations account "Krebskranke Kinder" is IBAN: DE65 5909 2000 7405 0400 12, BIC: GENODE51SB2 at Vereinigte Volksbank eG.